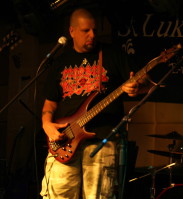 I have always been passionate about music and have now been playing the guitar for over 30 years.  I was self-taught as a teenager but my formal musical training has come since early retirement in 2002.  I obtained my grades on guitar and bass at Northwich School of Music, where I then taught both instruments for several years.  I have also worked at Mid-Cheshire College, where I studied Music Practice between 2006 and 2008.

I moved to Winsford in 2011 and set up 'Avondale Guitar Tuition' which is based at my home in St. Georges Road.

I enjoy, and am able to teach a wide range of styles and musical genres.  My repertoire encompases many of the varied styles of popular music which exist today.  However, I am primarily an electric guitar player and my own playing style is very much in a blues / rock vein.

My earliest influences were Motorhead, AC/DC and Judas Priest and then, from about 1979/80, the New Wave of British Heavy Metal.  My favourite bands were Diamond Head, the Tygers of Pan Tang, Saxon and Iron Maiden.  Of course I soon discovered a lot of the earlier rock and metal bands from the 70's; Deep Purple and Black Sabbath, in particular made a big impression on me.  As the 80's progressed and heavy rock and metal music began to diversify I was very much in the 'thrash metal' camp and a big fan of Megadeth, Slayer, Anthrax, Metallica, Testament,  Flotsam & Jetsam, Exodus, Annihilator,  Forbidden and Death Angel.  Later on Pantera were another favourite.  I still enjoy all of these bands today and am still very much in awe of guitarists such as Alex Skolnick, Dave Mustaine, Marty Friedman, Scott Ian, James Hetfield, Jeff Waters, Gary Holt, Kerry King and Jeff Hanneman .

One thing that studying and teaching music has done is to introduce me to many new styles and genres which I might otherwise have missed out on.  I really love blues guitar music and players like Billy Gibbons and David Gilmour have strongly influenced my own playing.  Stevie Ray Vaughan was another who had a big impact on my discovery of the blues back in the 80's.

I enjoy writing and recording music and find that the study of compositional techniques is also a  very effective way to teach music theory.  Over the last few years I have undertaken recording projects with many of my students, thus providing an opportunity for them to learn how to construct a piece of music from scratch, or record a cover version of a favourite song.  Students are often amazed at what can be achieved with modern recording software and a bit of 'know how'.

On a professional level I don't do anything other than teach music.  There are 'guitar teachers' around who are simply trying to an earn a little extra to supplement their day jobs and who have little or nothing by way of qualifications.  Of greater concern is that private music tuition is completely unregulated and anyone can set themselves up in business without any checks or safeguards.  Please be mindful of this if you are considering music lessons for a young person.

Or you are welcome to use my contact form